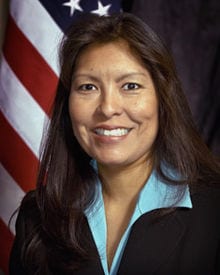 Receiving her law degree in 1933 from the Sandra Day O’Connor College of Law from Arizona State University, Humetewa used to be a Tribal Liaison and Senior Litigation Counsel before she was nominated to become a US Attorney for the District of Arizona in 2007. She resigned her position of US Attorney in August of 2009, when Dennis Burke was nominated as the next US Attorney for Arizona. But, in September of 2013 President Obama nominated Humetewa to serve as a US District Judge for the District of Arizona, a most historic achievement. In May of 2014, the Senate voted unanimously and Diane Humetewa was appointed, receiving her judicial commission on the 16th of May. With this amazing confirmation, Humetewa has set a precedent for taking steps to broadening the representation and makeup of federal courts.

Former US Attorney Paul Charlton commented in USA Today on her appointment saying that, “Humetewa has extraordinarily sound judgment,” and that, “in this state more than any other, where we have 21 reservations and all felony offenses tried in federal court, we do not have a bench that reflects the community it serves. And now, for the first time in our nation’s history, we’ll have a representative to the bench.”

Considered a national expert on Native American legal issues who has also taught law enforcement and prosecutors about these issues, Humetewa is a member of the Hopi tribe of Arizona. Since 2002, she has served as a judge pro tem (a placeholder of sorts to act when a superior cannot perform) of the Hopi Tribal Appellate Court and an ad hoc member of the Native American Subcommittee for the specific purpose of the US sentencing Commission. Humetewa has been praised for her integrity, fair judgments, expanded the District office to include security challenged, and provided victim advocacy services to crime victims, as well as advancing collaboration with Arizona’s tribal nations, which was unprecedented at the time.

So, congratulations to you, Judge Diane Humetewa, from all of us at 1st Tribal Lending! You have deserved it for a long time, and we are so excited to see the difference you make as an US District Court Judge for Arizona!